Response to letter from Dr. Jay B. Haviser

Please allow me the rare opportunity to respond to the letter to Editor of November 15, 2021, that was published the next day: “Dutch politician beats emotional drum for votes” by Dr. Jay B. Haviser, Archaeologist. In his letter he is responding to a letter to the Editor of November 12, 2021, “’Murder ship’ ‘Leusden’ anchored in Statia four times” by Kenneth Cuvalay, Ubuntu Connected Front (UCF) Caribbean. What I gather from his response, and using his method to generalize and summarize information is that: our local professionals, persons of African Descent, are “Emotional” and “Racist” when they speak out on matters relating to the atrocities that were done by those countries, including the Netherlands, that made their wealth from the “Trans-Atlantic Slave Trade”; Because of daring to point out the “Bad Reputation” in the field of “Archeology”, in particular as it relates to area of our ancestry, that it is “Misinformation” because it is not in line with the definition as prescribe on paper.

Dr. Haviser, who is the chairman of the Statia Heritage Research Commission (SHRC), and who also fail to mention in his rambling about “a Dutch Politician”, his connection with the St. Eustatius Center for Archaeological Research (SECAR), the same organization of which they are tasked to do an investigation on. It is quite interesting to note, that sometimes when Archaeologist are presenting themselves in forums to the wider community, they sometimes deem it pertinent to mention, that the work that they do, is not as it portrayed in movies, like “Indiana Jones.” In the case of SECAR past, the word on the streets doesn’t support the on-paper’s definition well.

The bottom line is, that there is a lack of factual history, as it relates to the Trans-Atlantic Slave trade of our ancestors, and our cultural heritage. The Trans-Atlantic Slave Trade is a crime against humanity as proscribe in international law. Yet it seems normal that a country, like the Netherlands, who does not feel it is important to muster up an apology, but on the other hand is actively engaging in activities for scientific importance relating to the same era. It also can give merit that criminals have the urge to return to the scene of the crime.

Dr. Haviser, in his emotional letter, seems to over look that the focus of the original letter is on archaeology as it relates to our ancestry. The Jews also played a part, as merchants, during the same period, but I never heard of graves of Jewish burial grounds being desecrated for scientific research to enhance the broader understandings throughout the Caribbean. A 40 years career developing community-engagement programs for heritage research, and it seems, based on his letter, that it might take another 40 years for him to realize, that he might be part of the problem and not the solution. Attacking persons of African descent, for educating other about facts that might go unnoticed, by using popular terms like “Q-Anon phenomena” is the common way of deflecting others from the truth. Even the European Parliament have passed a “nonbinding” resolution calling on the EU to recognize the slave trade as a “crime against humanity”. It was backed by 493 Members of the European Parliament, but with 104 voting against. This put one to wonder which EU countries those descending votes are from.

As Chairman of the Statia Heritage Research Commission (SHRC), and claiming to be evolve in community-engagement in Statia, it might be a good idea for him to first remove the knee off of the neck of our local professional, of African Descent, and do some self-reflection amongst his colleagues in the academia realm. 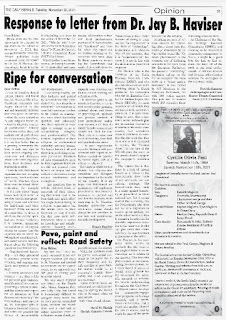 Related letters to the editor

November 23, 2021 - Response to the letter of Haviser by Jack Theuns: Biased to the bone