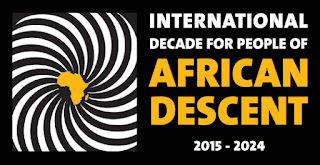 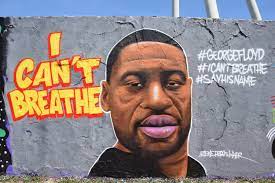 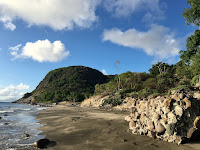 Kidnapped, trafficked, liberated, died in a quarantine camp and no rest even after death: that is the story of 325 Afrikan men, women and children who were ceremonially reburied on St. Helena over the weekend of 20/21 August. They are part of the forgotten history of the 'liberated' Afrikans of the trans-Atlantic slave trade.

Namibian environmental and cultural heritage consultant Annina van Neel has been concerned for years with the fate of the 325 men, women and children. She has fought for respectful treatment and for the reburial of their exhumed remains. Archaeological digs during the construction of St Helena's airport in 2008 uncovered their remains and for nearly a dozen years, they were stored in boxes in a stock room of an old prison. Now they are finally getting the respect and peace they deserve.

Impressive ceremony at the end of a lonely battle

The ceremonies on August 20 and 21 were dignified. On August 20, the coffins containing human remains were ceremonially reburied. On August 21, in a gathering of hundreds of attendees, poems, speeches, silence and music were shared near the mass grave. At the end of the ceremony, each attendee could tie a white ribbon to a tree. A permanent memorial has not been provided yet. Not everyone on St. Helena is equally pleased with the attention given to the mass reburial. Annina van Neel encountered a lot of opposition over the years. The documentary "A Story of Bones" that premiered at New York's Tribeca Film Festival in June this year, tells her story. A story linked to the sad fate of the Afrikan men, women and children who thought they had been liberated and returned home.

St. Helena as a depot of 'liberated' Afrikans in the 19th century: How a silent disaster happened

The mass reburial marks St. Helena's pivotal role in ending the trans-Atlantic slave trade in the nineteenth century. After Britain's ban on slave trade in 1807, the British Royal Navy began patrolling the Atlantic, intercepting slave ships that violated the ban. The abducted Afrikans aboard these ships were taken to St. Helena between 1840 and 1872. More than 25,000 supposedly liberated Afrikans have thus set foot on St. Helena. But they were not returned to their country of origin in Afrika. Some were shipped further to the Caribbean islands to work on the plantations. Thousands died in the quarantine camps along the hills of St. Helena in Rupert's Valley, unprotected from sun and wind and with few amenities. It seriously tarnishes the reputation that the United Kingdom likes to claim as the initiator and 'watchdog' of the abolition of transatlantic slave trade.

About 8,000 men, women and children are still buried anonymously on the island. St. Helena thus houses the greatest physical reminder of trans-Atlantic slave trade. It is the largest burial ground of enslaved Afrikans in the world. As is often the case with marginalized communities, this important part of their history has been largely forgotten and little recorded. Even the Dutch Wikipedia does not mention it. The island of St. Helena is best known as Napoleon's place of exile.

The Netherlands has a similar marginalized history from the time of trans-Atlantic slave trade. On St. Eustatius, once the largest transit port in the Western Hemisphere for slave trade, the St. Eustatius Afrikan Burial Ground Alliance fights for the respectful treatment of their excavated ancestors from the former Golden Rock plantation. They also want protection for the Godet cemetery, heavily affected by erosion, and the ruins of the nearby slave depot, the Waterfort. Kenneth Cuvalay, President of the Alliance, said: “Slavery has been identified as a crime against humanity by the United Nations and the European Parliament. The cemeteries on St. Helena and St. Eustatius are therefore important cultural heritage of the Afrikan diaspora community. A place to commemorate and say "never again" together."

What is needed to protect marginalized heritage

The St. Eustatius Afrikan Burial Ground Alliance has been working closely with St. Helena for the past year as well as with Peggy King Jorde, specialist in the field of marginalized heritage and involved in the creation of the African Burial Ground Memorial in New York in 1990. King Jorde has also worked with Annina van Neel on St. Helena and, like Van Neel, is co-producer of the documentary 'A Story of Bones'. Their expertise is invaluable to St. Eustatius.

Cuvalay: "The local government on St. Eustatius says it has no expertise or resources to do justice to this important cultural heritage. We want to create awareness at the Ministry of Education, Culture and Science and the heritage sector for the fact that the Afrikan cultural heritage on St. Eustatius exceeds the local interest. Due to slavery and colonization, the indigenous and Afrikan diaspora communities worldwide have lost the rights to their heritage. The Alliance wants moral will, expertise and resources to be made available to protect their heritage and have a say in it.

###
Copyright photo: liberatedafricanreburial_09makingtributes.jpg from The Slave Graves on Saint Helena Island Info: About St Helena, in the South Atlantic Ocean (slavegraves.htm) At 20:50:00 on Saturday 27th August 2022. More photos and information at http://sainthelenaisland.info/slavegraves.htm

About the St. Eustatius Afrikan Burial Ground Alliance
The St. Eustatius Afrikan Burial Ground Alliance is a movement that protests the excavations of Afrikan free and enslaved Afrikans at an 18th-century Afrikan burial ground in St. Eustatius (see https://www.change.org/LeaveOurAncestorsInPeace). The protests started in April 2022 and were initially led by the political party Ubuntu Connected Front (UCF) Caribbean. UCF is a political party that participated in the parliamentary elections in 2021 led by human rights lawyer Regillio Vaarnold. UCF did not get enough votes for a seat in parliament, but became the largest party on St. Eustatius with 50.8% of the votes. “Equality is a human right, not a privilege” is the motto of UCF, which focuses in particular on the interests of Dutch people with Afrikan roots: UCF goes out of the three pillars of recognition, justice and development (defined in the 'Black Agenda').

When it became clear that the activities surrounding the controversial excavations would last longer than a few weeks or months, the group started to organize itself outside the political spectrum and in November 2021 the St. Eustatius Afrikan Burial Ground Alliance became a fact. Located in St. Eustatius and with allies around the world, the St. Eustatius Afrikan Burial Ground Alliance broadened the scope of the struggle focusing on other Afrikan burial grounds in St. Eustatius such as the Afrikan Burial Ground Godet Plantation St. Eustatius (Godet/Fort Amsterdam). One of the aims is to further broaden the scope of our struggle to the Pan-Afrikanism level, connecting with and working with Afrikan-centered organizations and movements that are also fighting for the preservation of our ancestors’ endangered Afrikan burial grounds around the world and taking control of our narrative that has been distorted.

In response to the protests, the Alliance published a scientific article in January 2022 “A Future That Does Not Forget: Collaborative Archeology in the Colonial Context of Sint Eustatius (Dutch Caribbean)”. In August 2022, the Manifest “What the FARO Convention means for St. Eustatius” was published.

Afrika is spelled with a “k” instead of a “c” based on the following insights:
- It is a Pan-Afrikan spelling which relates both to the Afrikan continent and to the Diaspora;
- It reflects the spelling of “Afrika” in all Afrikan languages;
- It includes the concept of “ka”, the vital energy which both sustains and creates.

Manifesto: What the FARO Convention means for St. Eustatius

[Source quote]
In the period April - July 2022, the St. Eustatius Afrikan Burial Ground Alliance held a series of talks with the Cultural Heritage Agency of the Netherlands about the FARO heritage participation program and the position of the public entities Bonaire, St. Eustatius and Saba within it. Out of these discussions followed the decision that the Alliance would prepare a vision paper that was published in August 2022 under the title "Manifest: Visie op de betekenis van FARO voor St. Eustatius". The English translation is entitled: "Manifesto: What the FARO Convention means for St. Eustatius". The Manifesto is published as a living document of which an updated version is published regularly to keep the overview of current and planned activities up to date.
Download:
Manifesto: What the FARO Convention means for St. Eustatius 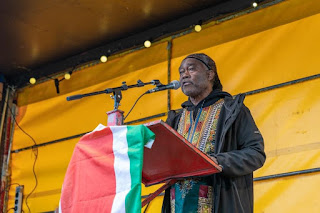 [See the events timeline for an overview of protest activities and media coverage since June 2021]
On St. Eustatius, Dutch Caribbean, an 18th century burial ground of enslaved Afrikans is being excavated by an international research team.

The excavations are carried out in a disrespectful manner and there is no involvement and input from archaeologists from the African diaspora nor the descendant community. The reasons why the archaeological research is being conducted are highly questionable. There is a lack of transparency from both the local government and the research team.

The research team is led by the archeological organization SECAR (St. Eustatius Center for Archaeological Research) that conducted a similar excavation at Godet, a plantation on the west coast of the island. "They worked in secret, left the site in a deplorable condition and put the remains somewhere without telling the local community where they are or what they did with them”, says Kenneth Cuvalay in a press release.

Despite suspension of archaeological excavations announced by the local government on July 14, objections are still being raised. We have issued a press release on July 19. We still have many questions and concerns. It is one step forward, but we are not quite there yet. Suspension does not mean discontinuance. Does this mean scientific suspension and discontinuation of our ancestral remains in laboratories outside of St. Eustatius? The local government now talks about the installment of a 'commission of experts'. Who will be on this commission? Friends of SECAR? More parachuted civil servants from the Dutch mainland?

St. Eustatius is a small island with 3,500 inhabitants. In the 18th century, it was the largest transit port of the transatlantic slave trade in the Western Hemisphere.

The objectives of the protests are outlined in the online petition

We need to work towards a more collaborative and participatory archaeology in the Netherlands, that has the ethics and sensibility to go into dialogue with us, as the Afrikan descendant community.

We need to start an urgent debate on decolonizing Dutch archaeological regulations and practices.

Moreover, we need to extend that debate to a global level for there are many more African Burial Grounds at risk in the Americas.

VIDEO: The story behind, A Story Of Bones 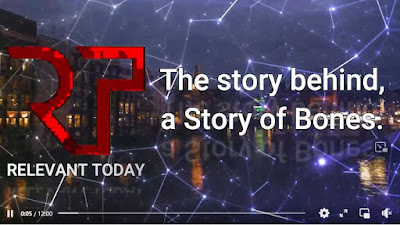