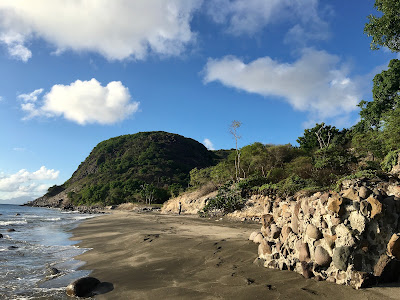 Photo: Ruins of the Waterfort (or fort Amsterdam) in which the slave house was located. In the background the Godet African burial ground

Ubuntu Connected Front (UCF) Caribbean wants a ‘Monument of Honor’ in St. Eustatius for all African people who have ever set foot on St. Eustatius in the eras of slavery. Rather than focusing on the abolition of slavery, UCF wants a prominent and permanent memorial site where the spirit and strength of our ancestors can be honored. A place where we can recognize the crimes that were inflicted upon them and how their abuse by the colonial powers contributed to the economic power structure of the Dutch republic that the Kingdom of the Netherlands was built on. Kenneth Cuvalay, chairman of UCF Caribbean: “We would like the Monument to be a gathering point for memories, African traditional ceremonies and prayers, not just for the residents of St. Eustatius but for other Africans in the diaspora as well. Tens of thousands of African children, women and men have forcefully set foot on St. Eustatius during the trans-Atlantic and inter-island slave trade only to endure all horrors of slavery. We must give them the dignified respect they have earned but never received.

St. Eustatius has a difficult relationship with its slavery past. Many cities in the Netherlands are now diving into history in search of traces of its slavery past. In St. Eustatius these traces are abundantly present. Not known by many, St. Eustatius was the largest transit port in the trans-Atlantic slave trade and the inter-island slave trade in the Caribbean in the 18th century. In 2021, it seems like you are still walking around in colonial times with colonial images and names in the public spaces and with landmarks such as Fort Oranje, battery De Windt, a memorial for infamous Dutch colonizer Michiel de Ruyter and one for a former Queen. Also, the much-promoted historical fact of the first salute to the US in 1776 was given by a slave owner. Not one sign of recognition of the crimes that our ancestors endured is given. No wonder that SECAR and other archaeologists come to St. Eustatius and dishonor the graves of our ancestors (see protests against excavations https://www.change.org/LeaveOurAncestorsInPeace)

The role of government should be creating preconditions for rewriting the history of slavery of St. Eustatius and thus doing justice to our ancestors. Recognition is the first step. It is important to teach our children that they are descended from African warriors and survivors and that our history is full of struggle and resistance. The majority of the inhabitants of St. Eustatius are of African descent, but generally relate more to the Caribbean identity. UCF wants to create more awareness for the importance of their African roots and the impact of the slavery past on their present situation. St. Eustatius is still ruled as a colony and many people on the island live in poverty.

Earlier this month, UCF started the Family Heritage project “Make the Connection” organized under the umbrella of the St. Eustatius African Burial Ground. It’s a community-based research project and the first volunteers have already registered. Cuvalay: “Telling our own story is important to replace the Eurocentric narrative. We don’t need Piet Hein in the school curriculum, we need Marcus Garvey. We don’t need Michiel de Ruyter, we need slave revolt leaders as Tula and Dupersoy, and so many more names of our African inventors and heroes which are never spoken of. In that regard, our prescriptive Eurocentric curriculum must be decolonized.”

One of the early discoveries of the Family heritage project is that the parents of the famous pan-Africanist Edward Wilmot Blyden were born on St. Eustatius. With the family trees of the participants, we are trying to make a connection to names of enslaved Africans in colonial archives. Eventually we want the names of all ancestors who were born before the abolition of slavery to be memorized on the monument”, says Cuvalay. Structural funding for research and education about our slavery past should be part of the memorial. A lot more research into our history needs to be done and we want to do that from an African perspective.

UCF is working on a community-based inventory survey on the realization of the Monument. The Old Market in Oranjetown would make a symbolic location for the Monument as this was the place where the sale auctions of our ancestors took place. How the Monument should look like is not in our plans, that is something for the community to discuss and decide on. What we do include in our proposal is to raise awareness for the deplorable condition of the ruins of the Waterfort (fort Amsterdam) in which our ancestors were housed before transshipment to the surrounding islands. It is threatened by erosion and the government needs to make resources available for its protection. The ‘Memorial of Honor’ and the Waterfort together with the Slave Path would make a powerful tribute, a guide and inspiration to us as African descendant community. The struggle of our ancestors is not yet over though. Not until we regain our full sovereignty, restoring our dignity and full reparations. We people of African descent must now accept and continue with responsibility the moral duty of the struggle our ancestors are waged as their legacy.”

[Note: the Slave Path is a steep cobbled road up from the old Lower Town to the Old Market]
###

Information for the Editor

Ubuntu Connected Front is a political party in the Netherlands founded in 2017. It participated in the 2021 Parliamentary election and although it did not receive enough votes to win a seat in the House of Representatives, it was the most popular party in St. Eustatius, receiving 50,8% of the votes. Motto: “Equality is a human right, not a privilege”. UCF focuses on equal rights for people of African descent.

Ubuntu
Ubuntu means "humanity" in African Bantu languages. It is often translated as "I am because we are", or "humanity towards others". It is Ubuntu Connected Front’s core belief that all people have rights, which promotes equality of treatment and eliminates marginalization and deprivation.

The 'Black Agenda' of Ubuntu Connected Front (UCF) can be found in the "Manifest for NL Transformation" at the UCF website (Chapter 5).